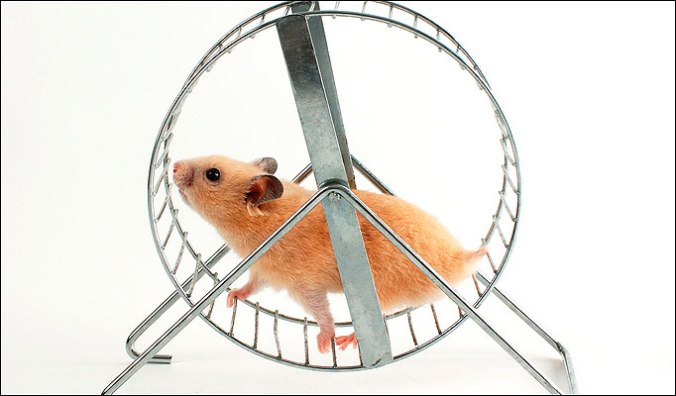 I told my colleague today about starting this blog. She asked about how much time I’d taken off, what I’d done, when I’d started working again. We’ll get into that later. She also commented on how hard it is to change pace when one is used to working in high-adrenaline contexts: Before I left my country program, there were so many things to do each day I could never fit them all in–but if I didn’t get them done, there would be serious consequences. Now I look at my planner and it’s not even full.  I nodded. It reminded me of the hamster wheel.

When I first decided to leave work, someone who knew what they were talking about told me, Adrenaline is like a drug. You’ll need to wean your body off of it, because it’s addicted to adrenaline now. Your body will resist. But you’ll get through it.

Six months later I was away from work, sitting on my couch, in the middle of winter, and I could FEEL my brain RUNNING. It felt like someone had opened my head, inserted a shiny metal wheel and then introduced a very fit and energetic hamster onto it. I wanted to fuel the hamster, I wanted to fill it up on news from Syria (my last deployment) and reports about ISIS taking Ar-Raqqah (near one of our health clinics) and ‘marching’ towards Iraq (the newest unfolding crisis in a long list of crises there) and long commentaries on the origins of ‘extremist groups’ and Facebook feeds from friends still working and living in the region and… you get the idea.

The hamster was burning up the wheel, running so fast that flames were practically END_OF_DOCUMENT_TOKEN_TO_BE_REPLACED